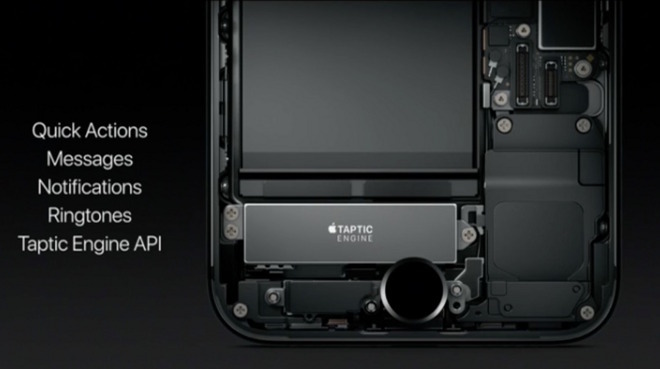 The Taptic Engine is Apple’s implementation of haptic user interface feedback. Using a linear actuator, devices like the iPhone 7 can reproduce the sensation of motion or generate new and distinct tactile experiences. In some cases, audio feedback from onboard speakers completes the illusion.

Apple applies its Taptic Engine to mimic a home button press, relay system notifications, and reinforce audio alerts. The technology doesn’t feel bolted on — feedback from the system feels natural, and in sync with what is being presented on screen.
Apps are only now appearing on the app store with Taptic Engine support, and the few that AppleInsider has tried aren’t well executed — yet.
The iPhone isn’t the first place the technology has been used. The Apple Watch uses it for user feedback after a user has scrolled past the limit of a field, to mimic a rubber band snapping back. Famously, the feature is also used to send a heartbeat to another Apple Watch user.

The iPhone has previously used the linear actuator for vibrations — this has shifted over to the Taptic Engine in the iPhone 7. Even through a case, the Taptic Engine feedback is strong enough to be noticed more distinctly than the older technology.

Alongside iOS 10, users can create a new vibration for use in both older devices’ linear actuator, and on the new Taptic Engine. Playing the exact same custom vibration back on the newer iPhone 7 family versus the iPhone 6s Plus gives a “crisper” sensation, and a more powerful one.

Expanding wider use of the technology, Apple has opened up the feedback with the new Taptic API. Previously an Apple-only feature, making the API available to developers will allow for better force feedback implementation OS-wide, and give developers a way to utilize the feature in other ways, such as haptic responses to actions in a game. 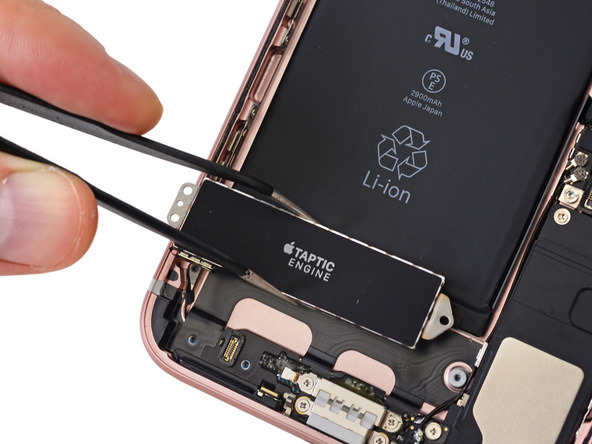 Not just a “rumble pack”

If you’ve got an iPhone 7, any use of pinch-to-zoom invokes a tap as users hit the upper and lower ends of the limits of the feature. Hitting a toggle switch in the control panel will shake the phone with the Taptic Engine a bit as well.

While the older linear actuator was best in class for cellphone vibrations, the Taptic Engine is much more precise, and gives better feedback with associated actions. The best example of Taptic Engine feedback is associated with the date and time wheels in the settings app.

If you change the date or time on your iPhone 7, an audio click is accompanied with a slight tap, simulating the spin of a mechanical wheel. The effect is subtle, yet noticeable, with a discrete build-up, click, and wind-down as each number scrolls past.

The best is yet to come

Apple’s implementation of the Taptic Engine is excellent, and blows away what the third party developers have implemented. However, Apple developers have an enormous head start on the feature.

Apple didn’t break the seal on the API until iOS 10 shipped, giving developers no lead time to get set up for the feature. As a result, apps supporting the feature are still few and far between.

“[A new Taptic API in the beta releases] would have revealed a new feature,” developer Rosyna Keller told AppleInsider. “Apple hates that, they tend to scrub it from public seeds until the next major public seed.”

Apps are only now appearing on the app store with Taptic Engine support, and the few that AppleInsider has tried aren’t well executed — yet. As developers become more familiar with the technology, third-party implementation will grow, and be more refined.