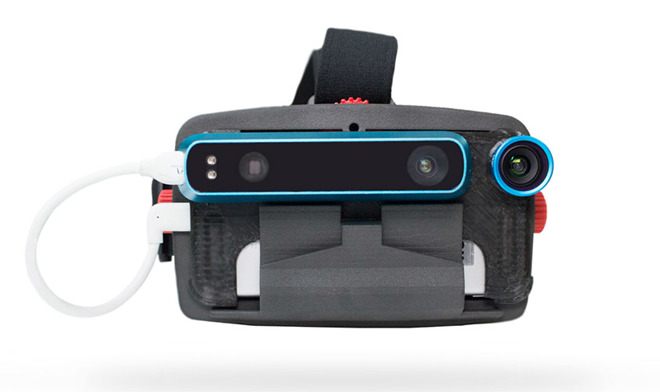 Though virtual and augmented reality technologies have long been available to phones running Android, as popularized by Samsung’s Gear VR product line, iPhone users looking to experience AR/VR are, somewhat ironically, relegated to Google Cardboard. That might soon change thanks to Occipital’s dev kit.

Small enough to fit on the back of an iPhone 6 series-sized device, the Structure Sensor works with Occipital’s SDK to create accurate color depth maps of a given environment. The technology allows for advanced applications like 3D scanning, large-scale SLAM (simultaneous localization and mapping) with and AR solutions. Apply the sensor to a smartphone headset cradle, add on a wide-angle lens adapter, and you have a viable VR rig with active object avoidance.

Powered by the host smartphone, Occipital’s VR kit is relatively power efficient, using only a single mobile chip core. Despite low energy overhead, the company touts a stable image platform with low jitter and latency less than 10 milliseconds. In its testing, however, Upload said the kit seemed less responsive than the advertised 10ms performance threshold. Part of the problem might be blamed on hardware constraints, as iPhone lacks low-latency screens.

The dev kit is just the first step on a path toward a full-fledged headset. Modern VR products rely on rotational tracking or fixed location light emitters to track user position, and are usually tethered to a host computer with a bulky cable. Object avoidance, when available, is accomplished through a built-in camera, as seen in HTC’s Vive headset.

Developers interested in putting the kit through its paces can apply to buy a copy through Occipital’s website. The system comes with one Structure Sensor, wide-angle adapter lens for iPhone, a Homido 1 VR viewer and custom 3D-printed faceplate and phone case.

Apple has also shown interest in AR/VR tech. CEO Tim Cook in July revealed Apple is investing in such solutions, and more recently said AR could be a “core technology” of future iPhones. Despite numerous patent filings relating to computer vision and intense spending, including acquisitions of sector specialists PrimeSense> and Flyby Media, the company has yet to produce a shipping product.